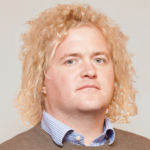 Our people are what makes Transparity special. So, we’d like to introduce you to some of our team so you can get to know the people who make it all happen and get their take on Winning from Anywhere. Introducing, Hugh Pope, Head of Business Growth.

Background and a bit about you

Having been something of a human pinball post university, I took a gamble on a recruiter in my LinkedIn inbox and agreed to interview at a company I’d never heard of in a town I’d never heard of for a job I was a little unclear about. I walked in to a bright orange office and wondered what the hell I was doing…2 hours later I walked out of my interview fairly sure I’d found my home. Frankly, the best decision I have made so far in my professional life.

Long story cut short, I joined Transparity in October 2018. *Technically* am the first WFA hire as I was the first person not based in and around Bournemouth – it helps that I was employee 28. It’s one of my minor claims to fame that I don’t think anyone beyond me finds that impressive. Also I am currently having an internal tussle on this title as the first fully remote joiner was Tom Davis (but I hired him so I get some credit).

How has Winning From Anywhere® impacted your work and home life?

I haven’t worked in an office since early 2017 so my pre-requisite when searching for this role was that I wouldn’t have to be office based. I love the freedom and independence that comes from being able to Win from the end of my garden. It’s also meant I haven’t been restricted on where I live and mid-Pandemic I moved from the middle of a town (boo, hiss) into heartland of the Thames Valley in S. Oxfordshire.

I have a horse and a dog so not being tied to an office means I can a) have the pets that I do and b) enjoy time with them without compromising work. In terms of work life, what can I say, I’ve held 4 roles in 4 and bit years at Transparity and gone from strength to strength. Zero complaints.

How have you found embracing the Winning From Anywhere® way of working?

How have you found building relationships with colleagues while Winning From Anywhere®?

Very easy, the technology we have (and sell!) makes video calls, group chats and regular communication laughably simple. I also don’t see WFA and seeing people in 3D as mutually exclusive, we just have the freedom to do that on our own terms. Imagine that, treating adults like adults… Take note employers of the world.

What would you tell future Transparity team members about Winning From Anywhere®?

Embrace it, don’t be afraid to shout, treat the virtual office as you would a physical office and communicate. WFA doesn’t mean working in mental isolation, it means you’re trusted to physically base yourself wherever you like.

Also, get a pet. Pets are the best.

What’s your favourite thing about working at Transparity?

The freedom to Win From Anywhere is undoubtedly a major perk. Beyond this the faith that the SLT place in us, the calibre of people I work with and the sense that I have a future here. In this world we have enough uncertainty and misery, where you choose to spend the majority of your week really matters.

What do you like to do when you’re not working?

I have a horse and a dog so mostly I hang out with them enjoying this beautiful slice of England. I’m a keen wildlife enthusiast and bird watcher (629 species and counting) I also have an insatiable travel bug (42 countries so far) this year has seen Colombia, Iran, Ukraine, Moldova, Hungary, Germany, Namibia….Next year Yemen, Mauritania and Pakistan.

I’m having to stop myself planning 2024 in too much detail, but Angola is really looking promising….

Our people are what makes Transparity special. So, we’d like to introduce you to Hugh Pope, and get his take on Winning From Anywhere®.

We discuss the controversial topic of Inbox Zero and offer some helpful tips for staying on top of your inbox without it ruling your day.